What goes into building a monument?

Meeting the 'Banksy of Monuments'

“Today’s the day!”, I told myself when I woke up. I started the day expecting to get a behind-the-scenes look into an unfinished monument, meet the artist, and share it here with everyone. It turned into a day of reflection and new understanding.

I am meeting the “Banksy of Monuments”, Joe Reginella, a sculpture artist who has been commissioned on behalf of I Am Your Protector (IAYP), a national public campaign that brings monument-type sculptures to public places across the country.

The next city for the installation is Nashville, Tennessee. Millions of Conversations (Millions) and Nashville’s Faith & Culture Center (FCC) partnered with IAYP to bring these Protector Monuments to the Centennial Park’s Earth Day celebration on April 23 . A part of the Listen First Coalition’s National Week of Conversation (NWOC), this event serves as a way to create healthy conversation on identity and community.

But before our event in Nashville kicks off, the final monument has to be built in Joe’s studio on Staten Island. I leave my apartment in Brooklyn and head to the Staten Island Ferry.

Joe was born and raised in Staten Island. His family moved to New Jersey when he was younger, but he returned to Staten Island 20+ years ago, and it’s been his home ever since. He mentions that parts of Staten Island struggle to keep up with the changing times. I can relate, as I myself am from what’s referred to as a “pit stop” town in California. Joe and I both agree there’s work to be done in communities across America to bring people together.

We discuss the partnership and collaboration between IAYP, Millions, FCC, and the NWOC campaign, a blending of our missions which serve to build inclusive communities through understanding.

Joe pulls up to his studio. He apologizes beforehand for the mess. I mention, “What artist studio isn’t disheveled from time to time?”. 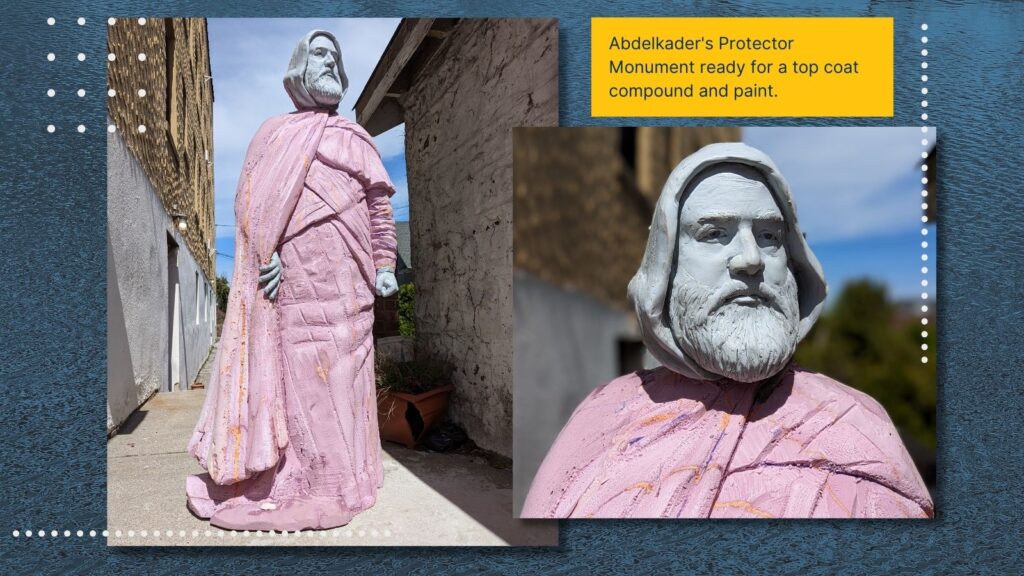 “Is this our guy?”, I ask. Standing on a small pedestal is Abdelkader El Djezairi, the newest Protector.

“That’s your guy.”, responds Joe. Abdelkader’s monument is in the final stage before being shipped to Nashville. He’s waiting for the top coat to create the stone-like appearance to match his face and the other five Protectors.

What makes Abdelkader worthy of becoming a monument? Abdelkader was committed to protecting and upholding human rights. When dangerous national and religious riots broke out in Damascus in 1860, he took thousands of Christians under his protection, including French, American and Russian diplomats. Regardless of identity, Abdelkader followed Islamic law and believed in the protection of innocents. It was estimated that he saved upwards of 10,000 people through his actions. Abdelkader received notable recognition from world leaders at the time and work is being done today to share his story to more people. Abdelkader El Djezairi’s Protector Monument is made possible by the Abdelkader Education Project.

What goes into building a Monument?

During my visit, I learned about the process Joe uses in building the Protector Monuments. The monuments need to be lightweight enough to ship easily throughout the country while durable enough to withstand rough travel and weather conditions.

The normal approach for sculpting—creating a mold and casting—won’t do in this project because it’s much too heavy. Instead, Joe glues together thick boards of lightweight foam and sculpts from there. Starting with big chunks to create the outline and then smaller files and knives to carve out details.

“I believe sculpting is 90% subtraction”, mentions Joe as he explains that his process revolves around chipping away from his material until he achieves the correct shape and texture, rather than composing his sculpts by starting with a smaller frame and building his way out. Joe takes his time to study his subject, understand proportions, lines, and wardrobe.

While the Abdelkader sculpture has been a year in the making, Joe estimates that he’s taken about a month’s worth of work to complete the monument. He likes to spend time with the piece, getting to know them. “It’s literally like watching grass grow, it’s a slow process.” 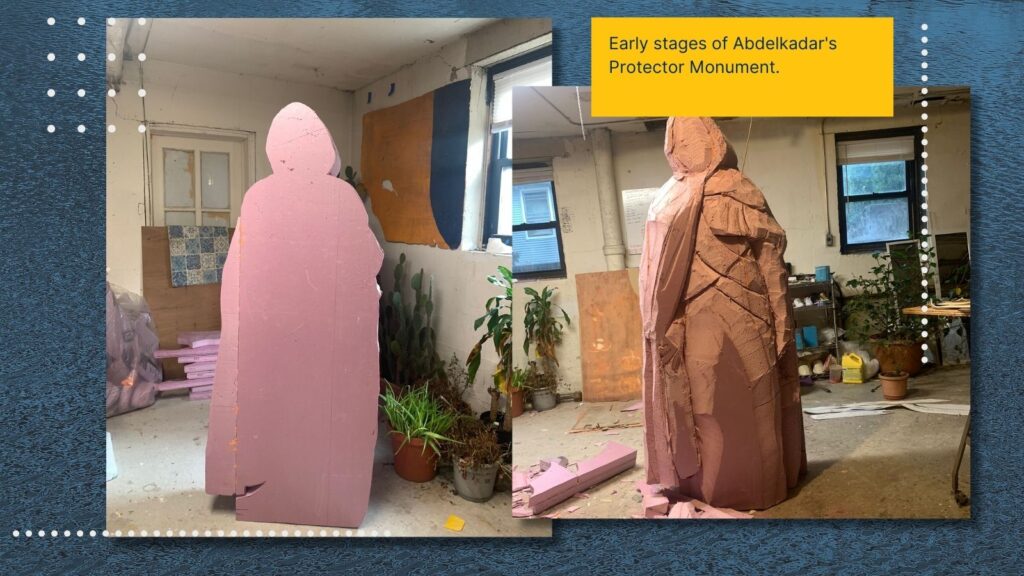 For Abdelkader’s monument, Joe had a particular challenge. All reference photos of Abdelkader are old, from more than 100 years ago. I can see from his practice attempts and models that Joe wanted this to come out just right. I think he did a terrific job, the finished Abdelkader ’s face is expressive and full of life.

The next and final step for Abdelkader’s monument is for the top coat compound to be sprayed on, set to cure, and finished with a paint job. The result is a statue that is indistinguishable from the stone and marble monuments you may see in parks and museums. 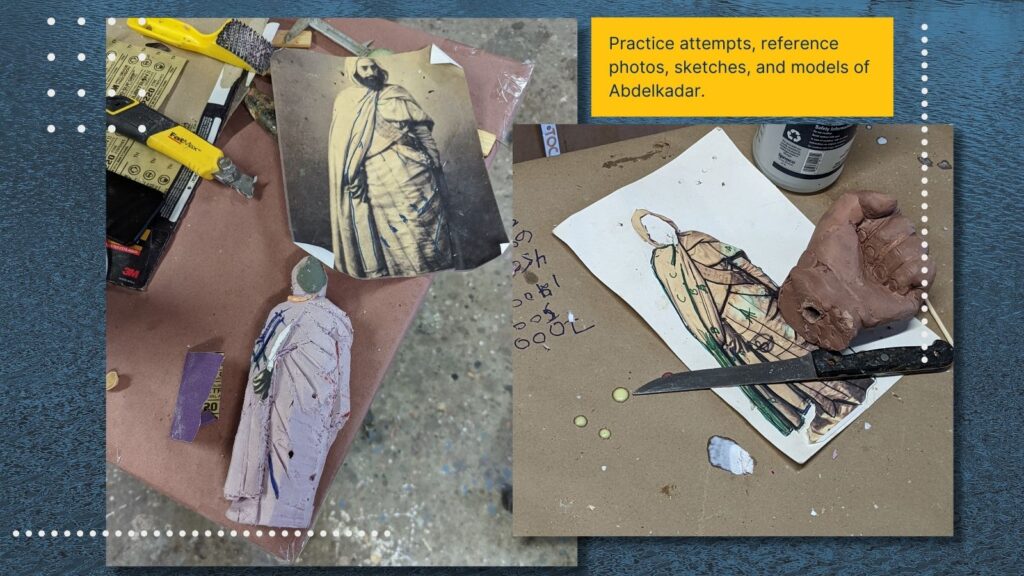 What is the meaning of a monument?

For the remaining time, Joe gives me a tour of the rest of his studio, explaining that most of his work is commissioned by big brands and artists, like Nike and Lizzo. When IAYP reached out in 2019, however, he was eager to work with their team to bring the Protector Monuments to life.

Joe attended the Protector Monuments when they were on display in Manhattan’s Union Square. He said it was very powerful and moving not only to him, but to those who interacted with the installation.

To see someone who we can relate to being celebrated on a pedestal is a powerful experience. It reminded Joe of his own personal values; we are all in this together and we have to move forward together.

I couldn’t agree more. There’s more to our community than political ideology. There’s a want and need to have a sense of belonging.

They say the best free view of Lady Liberty is from the Staten Island Ferry. After my day with Joe, having a connected conversation and understanding the artist’s process, I couldn’t help but see the Statue of Liberty in a different lens. Not only from a technical standpoint, but a symbolic one.

It is an emblem of America and France’s commitment to liberty. “The Mother of Exiles” is a symbol to Americans, new and old, that there is freedom and opportunity in this land. I’m reminded of my own history, a child of immigrants who took the challenge to create a better life for their children.

It’s not even the day of Installation, I’ve seen one unfinished monument, and I’m already moved by the experience. I hope that anyone who attends Earth Day at Centennial Park interacts with the Protector Monuments walks away with the same feeling.

In fact, I don’t think I’ll ever see a monument in the same way again. 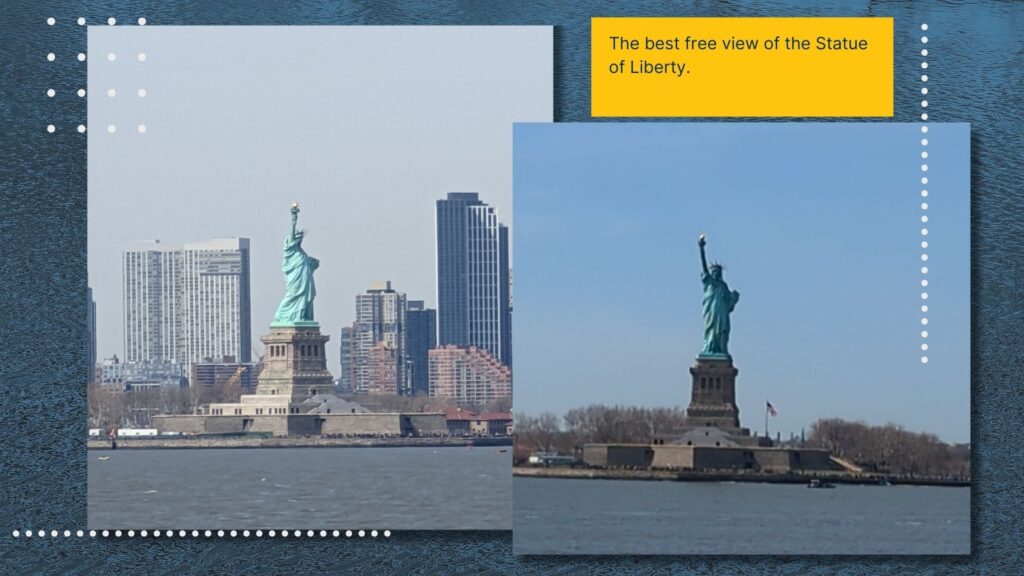 At Millions of Conversations, listening is the first step toward unity in America.

Fulfilling our Role as Americans