On March 25, 2022, Millions of Conversations partnered with the Grand Challenge Initiative on Racial Justice & the Third Reconstruction (RJ3) to host the fourth installment of the Racial Justice Teachout series. In this virtual event, we brought together an academic, a community organizer, and an elected official to discuss the fight against voter suppression and what solutions lay ahead. The discussion broke down the threat of gerrymandering and focused on how it targets voting rights in minority communities.

Dr. Bjork-James is an Assistant Professor of Anthropology at Vanderbilt University whose research focuses on U.S.-based religious right and white nationalists movements. She is the co-editor of Beyond Populism and the author of The Divine Institution: White Evangelicalism’s Politics of the Family.

Oliver is the Co-Founder and Co-Executive Director of the Equity Alliance, a Tennessee based non-profit organization that builds electoral power among the Black electorate by supporting and funding candidates of color, helping elect school board members, city council members, legislators, etc.

And finally, State Senator and Minority Leader Jeff Yarbro is a Democrat representing the 21st district of Tennessee. A lawyer at Bass, Berry, and Sims, he specialized in a pro-bono program for civil liberties and class action legal issues.

Here’s what we learned from this trio’s conversation.

The panelists began by first laying the groundwork for how white supremacy has historically influenced and limited voting rights in the U.S. Ever since Black people have become citizens in America, their very existence has been politicized, explained Oliver. Any assertion of their self-agency and progress has faced backlash, almost always violently. In the era of Reconstruction, this pattern emerged as an era of Black Senators were being elected across the country to Congress and local statehouses.

Per Oliver, this apparent progress triggered anxiety and fear in the “white power structure,” leading to the birth of the KKK and other forms of white terrorism. Oliver asserted that this pattern was not just exclusive to history either. Even today, demographic change undergirds much of the political instability we face.

As the country gradually transitions into becoming a minority-majority society, meaning a majority of its citizens belong to minority groups, white Americans stand to lose their historical status of the privileged majority. Words like “losing” and “power,” explained Oliver, trigger fear in white Americans.

“Conservative white Americans’ only experience with democracy is about hierarchy. They fear that if white people lose demographic power, they won’t just lose privilege, but will be subjected to discrimination. Equality is not about having a new minority subject to prejudice and it is possible to build something different,” added Dr. Bjork-James.

Sen. Yarbro added that this pattern of fear and anxiety underpinned by changes in demographic power is not just a national pattern, it is something we have seen right here in Tennessee. The history of everything from slavery to Jim Crow laws to the failure of Reconstruction, said Sen. Yarbro, are all so pervasive that they can’t be separated from our day-to-day reality.

As a result, the Tennessee constitution was passed in 1870 as a blueprint for other Southern states to reestablish power structures. The document not only influenced the region but it codified white power in the form of voting rights laws. 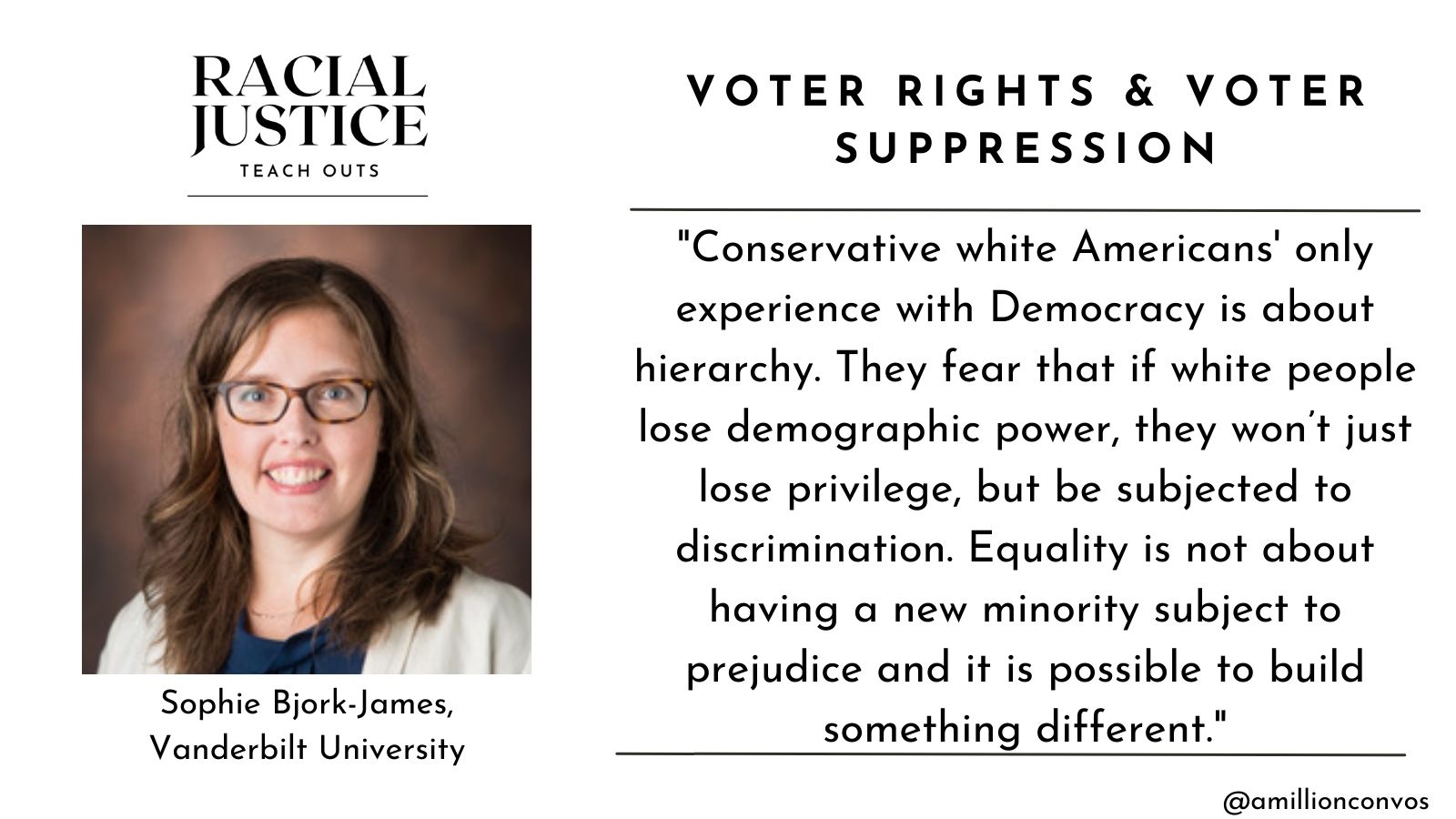 These historical precedents in Tennessee have made it an extraordinarily difficult place to vote. In middle Tennessee alone, explained Sen. Yarbro, there are four communities with large concentrations of Black voters. All four of these communities have been split up into four different Congressional districts through some of the most aggressive laws in the country.

Earlier this year, an academic in Illinois ranked the difficulty to vote in various states since 1996. In 1996, Tennessee was one of the top ten places in terms of ease of voting; now, it’s one of the top three hardest places to vote. Not only is it much harder now for people to vote, we’ve transitioned from being a state with one of the highest voter turnouts in the country to one of the lowest.

In recent years, the fight to retain these voting rights has made its way into the legislature too. According to Sen. Yarbro, “it’s clear that the two parties are fighting about whether or not we are going to have an inclusive democracy.” Because this has now become a wedge issue between the two parties, voting rights have been all the more politicized.

Whether it is against state legislature decisions to gerrymander or against the Supreme Court for complicating civil and voting rights, grassroots organizing has been key in making change on the local and state level. One of the biggest on-the-ground issues being organize around has been recent pushes for gerrymandering.

Gerrymandering is the manipulation of the boundaries of (an electoral constituency) to favor one party or class. In Tennessee, new electoral maps were not released to the public until the day of the committee hearing, meaning no residents were given any say or input into the process of deciding their own representation. Per Oliver, Equity Alliance was one of four groups that submitted alternative maps, proving districts could be drawn equitably– but these requests went ignored.

In the end, lines were drawn along Black neighborhoods, splitting the Black vote of roughly 28% of the area into three much smaller numbers in respective districts. The result was a loss of electoral power and representation. So what local efforts can we take to ensure fair access to voting?

What Local Efforts can be done to Ensure fair Access to Voting?

“Don’t be a spectator,” said Sen. Yarbro, “voting in just Presidential elections means you’re not voting for anyone who exercises day to day power in your own community, on things that affect your own life.”

The nationalization of politics, he explained, has led us to sit back and watch it play out on our TVs. Voting has become passive, we simply “root for the red or blue team rather than taking part.”

Sen. Yarbro asserted that it’s not everyone’s job to fix everything, but all of us can do something to contribute to a better future for our community. It is up to us to pick out spaces within grassroots organizing based on our “gifts.” There are so many places for us to contribute in a big way by donating our time and talents. 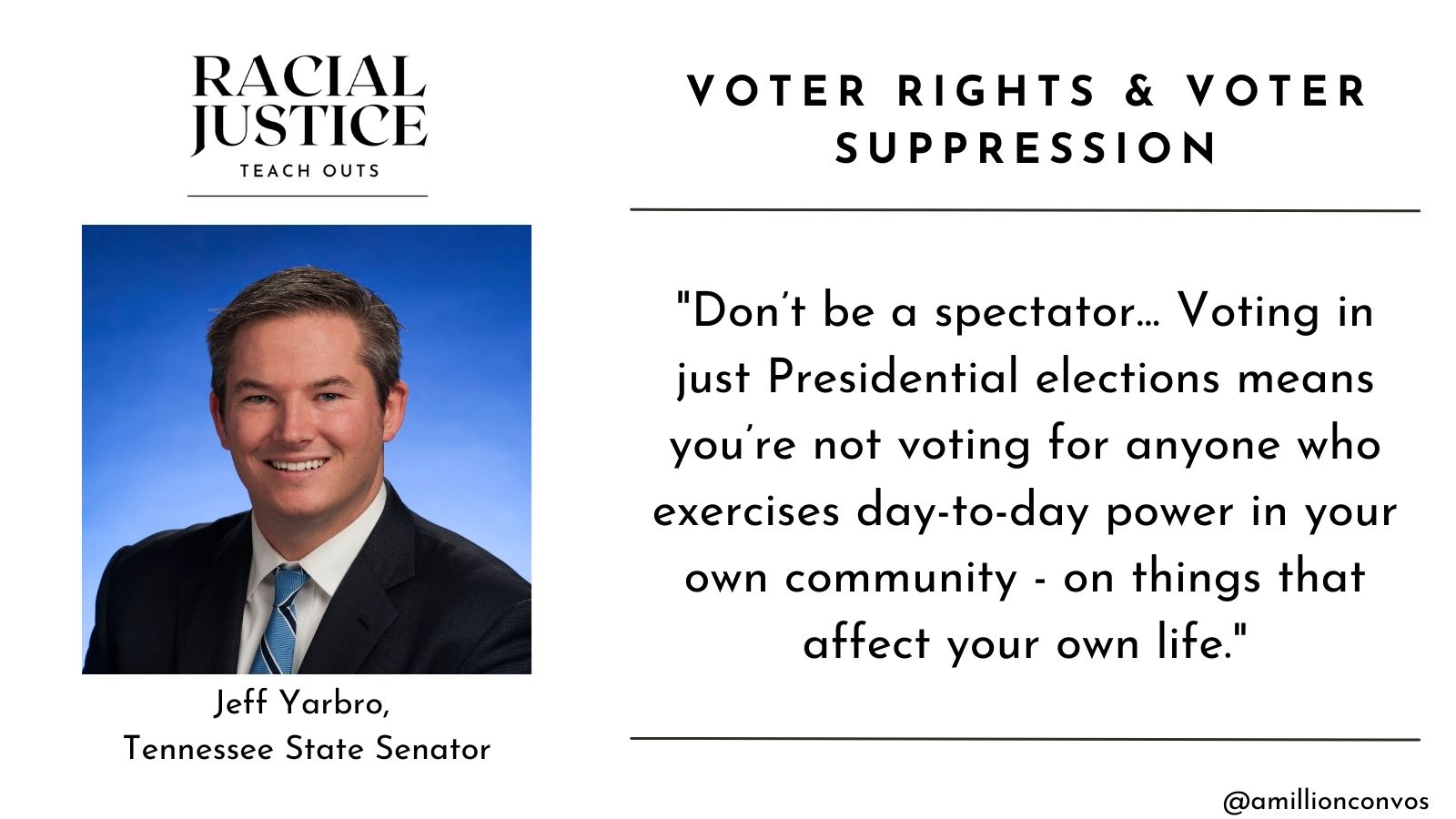 According to Sen. Yarbro, it’s also important to build coalitions and go where it’s not necessarily comfortable. Giving people the grace to change and grow creates an environment of collaboration that is helpful to the future of organizing. “If we build the future only on people committed to racial progress in the country, we wouldn’t have racial progress,” he added.

As a lawmaker, Sen. Yarbro practices this himself by going out into his county and talking to his constituents to build bridges. Even to him, this can be a challenge, but it is important in order to create positive change.

As a leader at the Equity Alliance, a group making waves with their grassroots organizing in Tennessee, Oliver also shared some tips for effective community activism. Oliver explained that she has a love-hate relationship with the term “activist” because of the stereotypes and stigma around it. “Everyone acts so everyone’s an activist – we all have a duty to act,” explained Oliver. The toxicity of the political space often leads people to opt out of politics. But Oliver asserts that doing so means that you’re allowing for other people to speak for you.

As people grow into their identities as activists and organizers, Oliver reminds us that small acts can lead to bigger wins. Having worked in Congressman Jim Cooper’s office, she’s seen the effect that even a few phone calls can have in building public pressure for change. Some of the ways that she encourages people to take action is through meeting their representatives, making calls, sending emails, knocking doors, hosting gatherings and discussions, and filing pro-bono lawsuits.

How can I learn more about voting rights?

To learn more about the fight for voting rights and how you can help, visit the Equity Alliance website here.

To learn more about the historical precedents around voting rights, check out Nicole Hannah-Jones’ 1619 Project for the New York Times. Oliver recommends this resource because it illustrates how every institution in American society has a connection to chattel slavery. For further reading, she recommends How to be an Antiracist by Ibram X. Kendi, One Person, One Vote by Carol Anderson and Tonya Bolden, The New Jim Crow by Michelle Alexander, and Dying of Whiteness by Dr. Jonathen Metzl. MLK50 and the Tennessee Holler are important local resources as well.

Sen. Yarbro also recommended The Children by David Halberstam and any texts by the late John Lewis. He also emphasizes the importance of bringing national and local news into your daily news intake. Without having to read every paper cover to cover or stay tuned into the news 24/7, we can all find avenues that work for us to see and read trusted and diverse voices.

“It can be hard to find local news,” Sen. Yarbro said, “so finding good local sources and aggressive, smart local reporters is important.”  According to Yarbro, the Tennessee Holler is one of the best starting points.

How can I have a Conversation about these topics with others?

In this discussion, Oliver closed out this Racial Justice Teachout with the question “Are you okay with someone speaking for you?”

Starting difficult conversations creates a space for you to make your own voice heard, all the while making it possible for others to speak for themselves too.

We know it can be challenging to have conversations about politicized issues, like voting and gerrymandering. That’s why we created a system of tools you can use to help bridge the divide. Our Listening Guide is our research-informed guidebook on how (and why) to have difficult conversations.

Finding common ground with members of our community who are vested in making change and coming together around those shared challenges is a cornerstone of progress.

Learn more about the Grand Challenge Initiative and RJ3R.

Our next Racial Justice Teachout will cover Immigration and Border Politics. Register here for the event at 12:00 pm CST on April 1, 2022.

Scholars and activists discuss racial injustice in the colorblind systems of prisons and policing.

#LetsTalk: Looking Back on January 6th