On April 1, 2022, Millions of Conversations partnered with the Grand Challenge Initiative on Racial Justice & the Third Reconstruction (RJ3) to host the fifth installment of the Racial Justice Teachout series. In this virtual event, we brought together a law professor, a community organizer, and an artist and art professor to discuss the fight for belonging in America and what solutions lay ahead for immigration justice. The discussion broke down the struggles of immigrant communities in Tennessee and celebrated the work of community organizers working to combat them.

Moderated by Vesna Pavlović, Associate Professor of Art at Vanderbilt, the panel included Dr. Karla McKanders and Sabina Mohyuddin. Pavlović’s work focuses on issues of memory and representation through photography and art.

Dr. Karla McKanders is a Clinical Professor of Law at Vanderbilt Law School and Director of the Immigration Law Clinic. She teaches issues of critical race theory and immigration law. Professor McKanders supervises students providing representation to asylum seekers and unaccompanied minor children in their humanitarian immigration cases before the Department of Homeland Security, the Department of Justice and federal courts of appeals.

Sabina Mohyuddin is a Bangladeshi-American Muslim and Vanderbilt Alumna (‘93). She  has published a number of articles in The Tennessean and was an outspoken critic of the 2011 anti-sharia bill in the Tennessee state legislature. She is a founding board member and currently the Executive Director of the American Muslim Advisory Council, which empowers the Muslim community in Tennessee through civic engagement, community building and improved media relations. She serves as the chair of AMAC’s yearly Empowering Women conference. Additionally, Sabina serves on the boards of the League of Women Voters Nashville and the National Organization of Workforce Diversity.

Here’s what we learned from this trio’s conversation.

Having worked extensively with immigrant communities or lived through their own migration experiences, our panelists and moderators began by exploring the concept of belonging in America. A common threat throughout the discussion was otherizing– a term that refers to making a group or person feel different than their surroundings. By pressuring immigrants to assimilate in order to belong, they explained, we further stigmatize and otherize their existence in the United States.

So why is it important to these community organizers, artists, and lawyers to make sure immigrants have a sense of belonging?

“To feel empowered is to feel you belong in the communities and country you live in,” Mohyuddin explained. She went on to explain how, even as someone who was born in the United States to immigrant parents, Mohyuddin faces the same “otherization”. 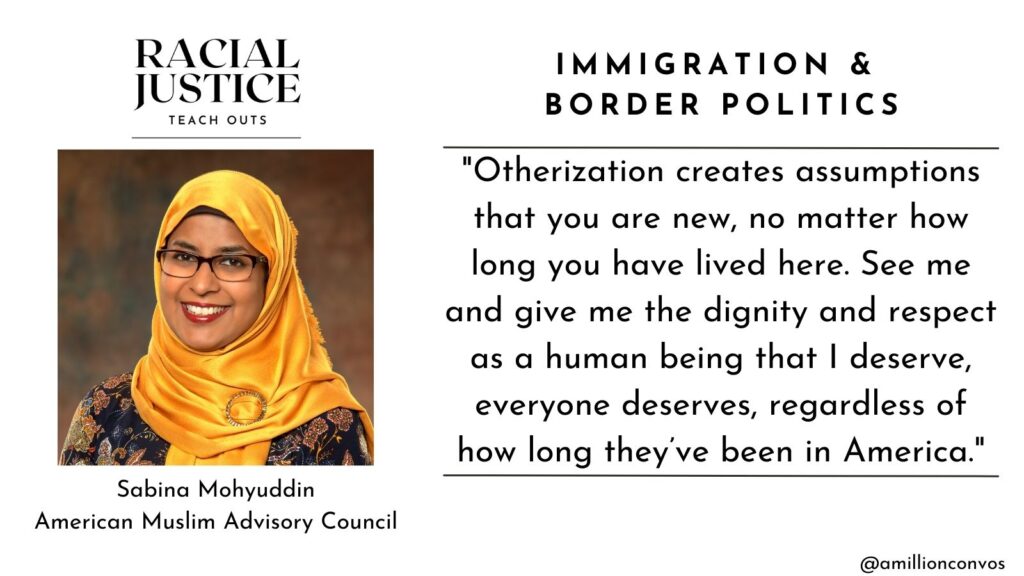 Pavlović began the discussion about belonging with her own story of finding belonging as an immigrant in America. The immigrant experience, she explained, predisposes people to a feeling of belonging to multiple places, yet none all at once. While they might feel some sense of belonging to their home countries and new communities, immigrants struggle with fully feeling a sense of attachment to either, she asserted.

Pavlović went on to pitch this question to our panelists: “How can we work to facilitate those who struggle with belonging?”

One solution, explained Moyhuddin is to grapple with our understanding of an idealized American identity. “We talk about immigrants needing to come in and assimilate. We ask them to give up parts of their identity to come into an idealized American identity,” she said. Being able to fully express themselves, their cultures, religious customs, and identities is central to fostering a sense of belonging for immigrants around the world. 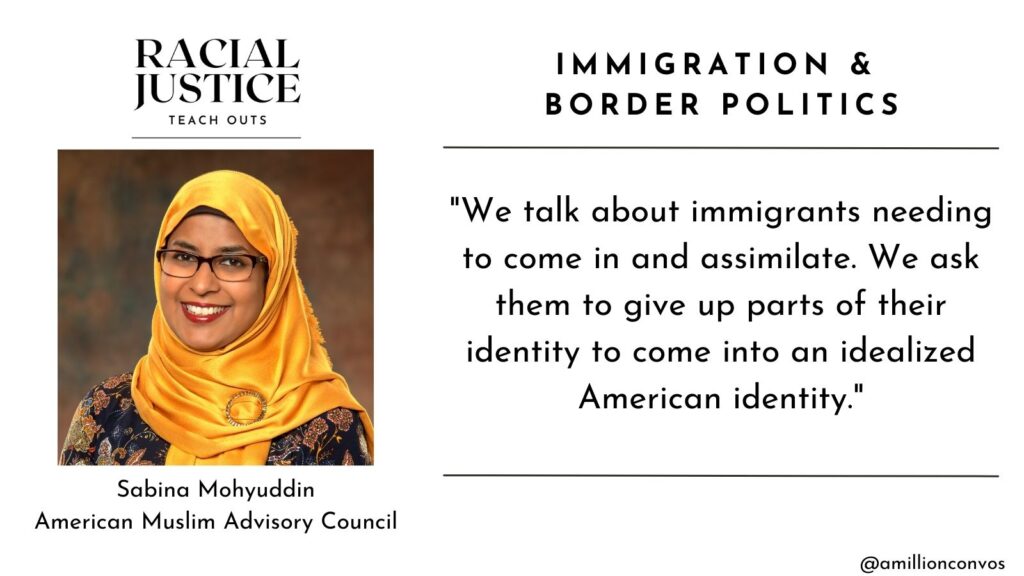 As our panelists went on to discuss, immigration and border politics is not an isolated issue in America. The history of immigration laws in the United States has been imbued with racial prejudices, explained McKanders. When the first immigration laws were first created, they constructed our earliest concepts of race.

According to McKanders, “‘who is considered a white person?’” was the predominant question of immigration laws in our country’s earliest days. The first naturalization cases considered Japanese and Iranian migrants who argued that their proximity to whiteness should qualify them for citizenship or legal status. The judges that decided these cases relied on social knowledge, not legal precedents to make their rulings.

“Our borders are racialized. Who gets to come in and apply for asylum and come in on a visitors visa is racialized,” explained McKanders. Assimilation isn’t just a social or cultural norm, she continued. It’s a concept that has permeated our immigration legal systems and reinforces the idea of a white norm to which people should conform. 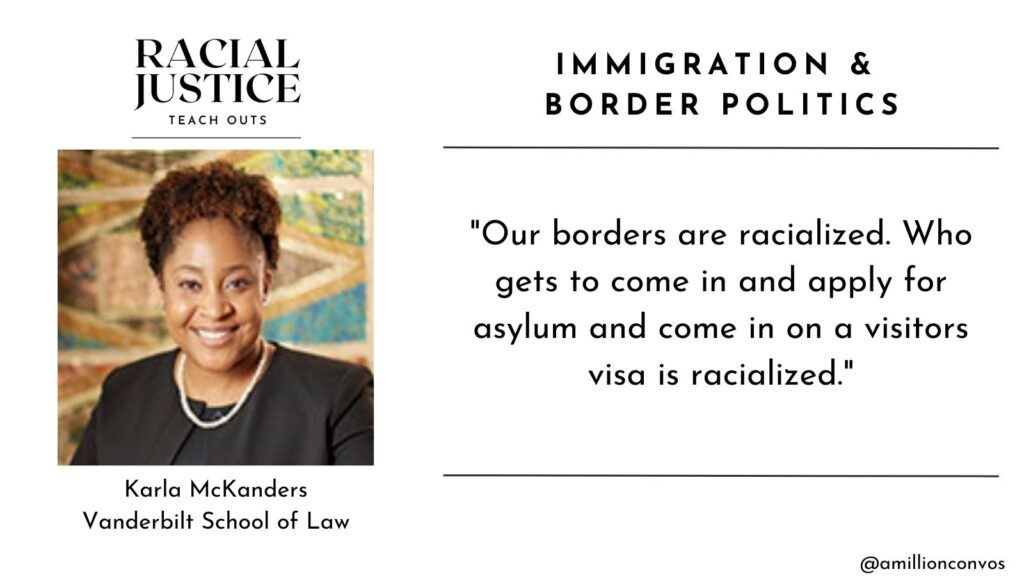 Pavlović added to the conversation with her experience from her citizenship oath ceremony in Nashville. She became a citizen in 2016 and her ceremony included 60 other immigrants from 40 different countries. “That is a snapshot of Nashville,” Pavlović said.

From the “Muslim Ban” enacted under the Trump administration to the prison to deportation pipeline that disproportionately impacts Black and Brown immigrants, our immigration laws have not been neutral on race, religion, class, and many other factors. So what can we do to work towards more inclusive communities?

Community Organizing for Migrant Justice and Other Solutions

Towards the end of our discussion, Professor McKanders posed the question: “Are our policies operating in a manner where they value the humanity of all immigrants and refugees?”

If you go back to this history of the Chinese Exclusion Act, she explains, you can see that the branches of government have wide discretion when it comes to governing immigration. “Immigration laws are often cloaked in neutrality,” she added.

This cloak of neutrality, however, should not protect unjust immigration laws from backlash. From large advocacy organizations filing issue-based lawsuits on the national level to on-the-ground attorneys fighting asylum cases daily and community organizations supporting resettlement efforts, many people are working towards bringing about change.

So who should we direct those calls for change to? According to our panelists, immigration issues are not isolated to any single administration or presidency. Discrimination often seems like it originates from just one bad actor, explained Professor McKanders. However, “Removing an individual doesn’t remove the system in which they are operating. The laws keep the system in place,” she elaborated.

From expanding the carceral system to enacting policies like Title 42 or the “Muslim Ban,” Presidents from either party have harmed the status of immigration reform throughout history. 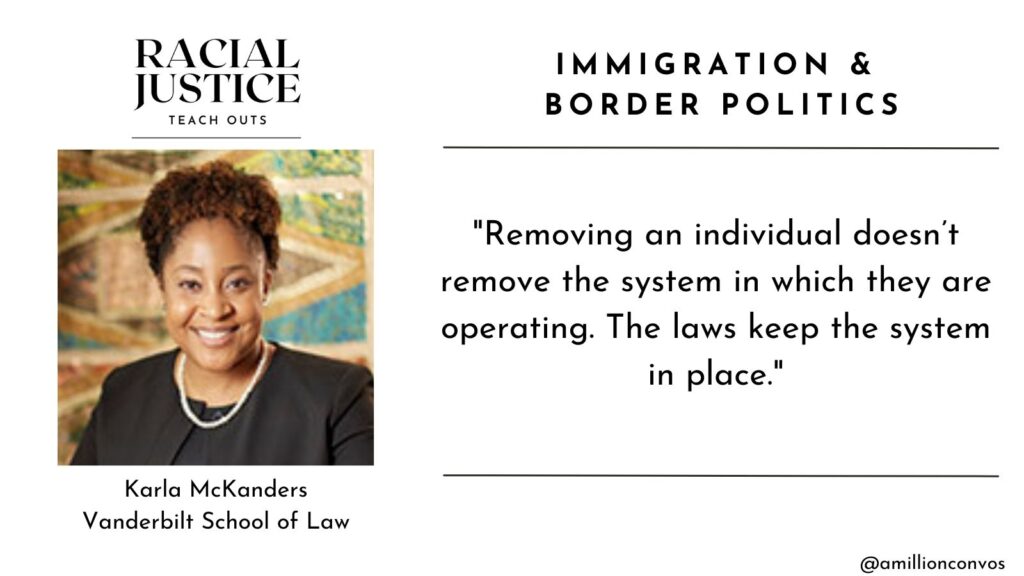 Mohyuddin added that there are a few key ways community organizers should approach their work on the issues. The first step is to begin by understanding the people you are trying to help. Then, follow these key tenets:

How can folks get involved with supporting #immigrants in #Nashville? From @Sabinazm4

📌Don’t shine a light on yourself, ask what they need from you.
📌Take cultural competency training to help people understand one another better.
📌Give them agency of their own

How can I learn more about immigration, race, and border politics?

Listen to Karla McKanders’ interview on the podcast ‘Only In America’: Racial Justice and Immigration. Read McKanders’ op-ed on what the American Bar Association is doing to address these issues within the immigration system.

Visit Tennessee Immigrant & Refugee Rights Coalition and Tennessee Justice for our Neighbors. The Vanderbilt Immigration Clinic is also in need of interpreters.

How can I have a conversation about these topics with others?

Starting difficult conversations creates a space for you to make your own voice heard, all the while making it possible for others to speak for themselves too.

We know it can be challenging to have conversations about politicized issues, like immigration and border politics. That’s why we created a system of tools you can use to help bridge the divide. Our Listening Guide is our research-informed guidebook on how (and why) to have difficult conversations.

Finding common ground with members of our community who are vested in making change and coming together around those shared challenges is a cornerstone of progress.

Learn more about the Grand Challenge Initiative and RJ3R.

If you’re in the Nashville area, we invite you to Centennial Park on April 23, 2022 to view an art installation that intersects art, activism, and storytelling. Learn more about I Am Your Protector here.

Scholars and activists discuss racial injustice in the colorblind systems of prisons and policing.